I am proud to announce that with today's Eclipse Neon release we have officially published the new GEF4 components in version 1.0.0, exposing their up to now only preliminary API. We have worked intensively on the code base since the 0.2.0 (Mars.1) release and have achieved quite a lot.

From an adopters viewpoint, the (up to now provisional) API has been cleaned up and harmonized in nearly all places. We have for instance adopted JavaFX collections and properties throughout, so that we can now use only a single notification mechanism in all places. As outlined in detail in an earlier post, this also enables us to use JavaFX bindings, which makes framework and client code more concise. Especially the GEF4 FX component has profited a lot from this. We have further simplified the contract of the GEF4 Layout component to no longer rely on own interface abstractions for data exchange, but to use a GEF4 Graph model, similar to what GEF4 Zest already did for rendering. And we have harmonized the GEF4 Zest API, especially those parts related to JFace. The New and Noteworthy page gives a quite detailed overview of the most important API changes.

From an end-users viewpoint, the GEF4 DOT component has been brought a huge step nearer to its final goal of being a full Graphviz DOT authoring environment (even if its still a far way to go). The Xtext editor can now also parse and validate certain attribute values, and the Graph view is capable of rendering a first set of node shapes, as well as edge styles and decorations. All DOT spline types are now also supported. In addition to the 'emulated' layout we provided so far, where a GEF4 Layout algorithm is used to mimic the Graphviz layout, we now support a 'native' mode, in which the native dot executable (the path to which is specified via a preference) is used: 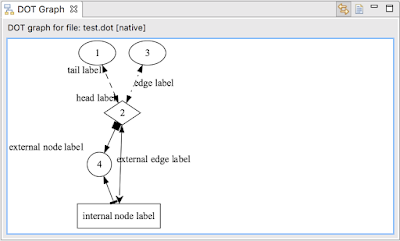 Connection handling has been significantly improved. We have added support for orthogonal routing in addition to straight routing, and we have separated out an IConnectionRouter, which is responsible for manipulating the bend/control points, as well as an IConnectionInterpolator, which determines the to be rendered curve geometry. Routers and interpolators can be freely combined, so a connection can now be routed orthogonally, while it can still be rendered ‚smoothly‘ using Bézier curves: 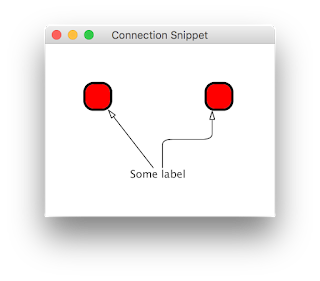 In addition, connection decorations are now properly clipped (which lies within the responsibility of the interpolator), and a 'clickable area‘ (a transparent fat curve that overlays the connection) can now be used to make a connection clickable even when the zoom level is large (we have added this functionality to the GeometryNode so it is usable in an even broader scope).

Within GEF4 MVC we have accordingly enhanced FXBendConnectionPolicy to provide interaction support for manipulating connections that are orthogonally routed. These can now be manipulated using segment handles rather than handles for way/control points:

We have further enabled that distinct bindings can be specified for viewers with different roles. That allows us to use an FXViewer both as palette and content viewer, so a palette can now be easily realized. We have augmented the MVC Logo example to serve as a demonstrator: